In woodturning circles today Richard Raffan is best known as a writer and teacher, for his books, videos, and magazine articles, as well as for demonstrations and hands-on workshops.

But this notoriety came upon him in the mid-1980s on the back of a reputation established in the crafts in Britain in the 1970s, well before woodturning took off as the popular hobby and aspiring art form it is today, and before he moved to Australia in 1982.

Richard was never a hobby turner. He left school in 1961 intending to be a landscape artist, and went to art school for two years then realised an artist needs a proper job and regular income.

Whilst wondering what to do he laboured a few months for a landscape gardener. Then came four months selling real estate which ended when he accepted an interesting offer from Desmond Sawyer Designs, a small craft-based design and manufacturing company.  There Richard learnt a lot about small-scale manufacturing, about selling whilst on the road as their sales representative and at trade shows, and about the nitty-gritty of running a small business. It was a great help when he set up his own.

In 1965 Richard joined a London wine shipper, where he experienced most departments — labelling, bottling, packing, delivery, orders, accounts — and ended up overseeing eight retail stores for a subsidiary company.  He was extremely well paid, but in 1969 began thinking he’d be more fulfilled making something. He left London at dawn on January 1st. 1970, driving west with the rising sun into a new decade and new life in South-West England. 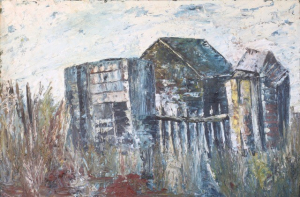 The start of woodturning

Richard was 26 and had decided, on a whim, to go woodturning — about which he knew nothing other than the craft involved a lathe and tools with long handles.

He had never worked on a lathe, but reckoned that if he enjoyed the craft and developed good technical skills, he’d make a decent living by selling what he enjoys making.  And that’s what he’s done since June 1970.

To learn the basics Richard paid a small production workshop up front for a year’s tuition, and they would keep everything he made. After four months he needed to earn some money, whilst the workshop began to wonder how they’d replace him and his production once he’d left. So in June 1970, Richard set up on his own and created his own apprenticeship. He taught himself to use skew chisels turning the scoops for which he became famous, and knobs for blinds and light-pull cords. He mastered gouges and scrapers by turning hundreds of sugar bowls, breadboards, plates, and salad bowls.

In 1970 retailers expected manufacturers to have a catalogue, and Richard did.  He offered a range of shapes and sizes that could be ordered on a regular basis. But there was a problem: as a novice turner his ineptitude was such that few bowls matched those in his catalogue. He had a lot of one-off bowls to sell.

In 1970 most wooden items for sale were teak and of Scandinavian design. Richard decided to use wood other than teak and he soon found his colourful one-off bowls in figured cherry, sycamore, yew, and afzelia, appealed to retailers. He only went out selling twice, as repeat orders soon had him working ten-hour days. And more retailers came to him.  He’d created a market for one-off bowls, boxes and scoops, and his business was up and running.

Richard’s utilitarian bowls, scoops, large boxes, and plates sold to kitchen, gift, and souvenir shops, whilst the emerging craft galleries purchased his thinner and less practical bowls as well as his boxes and scoops. Work was always purchased outright by the shops and galleries. Richard has never had to consign work, which is why his work has rarely been found in American galleries.

For three months in 1978 Richard was Craftsman in Residence at Sturt Workshops in Mittagong, just south of Sydney. He returned there in 1982 when he emigrated to Australia. Starting over in a new environment is challenging, but he soon found four galleries that kept him fully occupied. In 1983-4 he served on the Australian Crafts Council Selection Panel.

In 1984 the publication of Turning Wood with Richard Raffan with a complementary video, led to parallel careers writing and teaching (with a lot of travel) that had to fit in with Richard’s production turning. 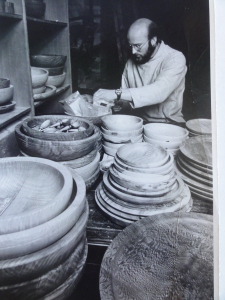 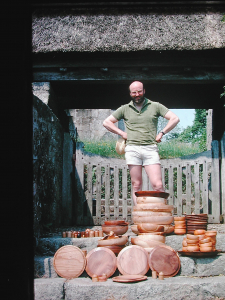 In 1978 Richard came to Australia for three months to work as a Craftsman in Residence at Sturt Workshops in Mittagong, just south of Sydney.

He returned there in 1982 when he emigrated to Australia. Starting over in a new environment is challenging, but he soon found four galleries that kept him fully occupied. In 1983-4 he served on the Australian Crafts Council Selection Panel.

In 1984 the publication of Turning Wood with Richard Raffan with a complementary video, led to parallel careers writing and teaching (with a lot of travel) that had to fit in with Richard’s production turning.

He began formal teaching in 1978 at Highland Craftpoint, in Scotland, advising embryo craft businesses in the Scottish Highlands and Islands. Apart from that he did very little teaching until becoming a regular presenter at the Utah Woodturning Symposiums in the mid-1980s. Ever since he has been in constant demand for hands-on workshops and as a symposium presenter.

Richard enjoys teaching — he’s led around 500 hands-on workshops, mostly in North America, but also in England, Ireland, France, Germany, Denmark, Norway, and Australia and New Zealand. Workshop tours only ever occupied a few weeks each year making a welcome change from cranking out bowls. Being out of the workshop for weeks at a time meant that fulfilling orders and keeping galleries stocked was often a challenge. 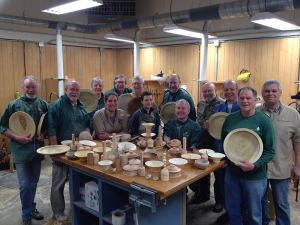 Since 1980 Richard Raffan has written dozens of articles and reviews for numerous magazines.

Well into what are regarded as retirement years, it’s a long time since Richard spent most days at a lathe.

In March 2020 Richard realised he had to be realistic and admit that at the age of 76 he no longer had the staying power for weeks of hands-on workshops and the overseas travel these involve. Then came the covid pandemic lockdown to make sure he stayed at home.  He’s also acutely aware that it’s best to retire early near the top of your game so as not to risk later humiliation when clearly over the hill and past it.

But he still welcomes the occasional commission, demonstration, hands-on workshop, and any other not-too-strenuous chance to pass on what he knows. Apart from that there is a dinghy to build, snooker, writing, some gentle cycling, reading, cooking and walking.